Will you be my Anamcara? 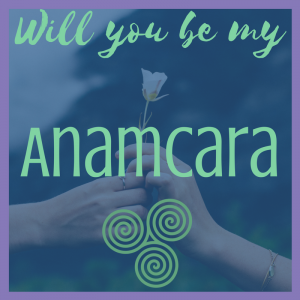 I’ve been thinking a lot recently about what led me to the point where I was ready to give up on Church. Because I had done it before. You see, between 14 and 17, I experienced repeated trauma at the hands of the Church. First, it was a head pastor caught in a hot mess of sexual assault and scandal. Then, that pastor fired my favorite leader in the Church. I tried other churches, and encountered wonderful things, but also hurtful things. When I experienced my first sexual assault at 14, I had nowhere in the Church to turn, because I wasn’t sure how it would be received. Those doubts manifested in a painful reality when I was 17 and was date-raped by my boyfriend. The Church turned on me, so I left it.
Now, reading the sacred texts, I can see that all communities since the dawn of time have been human – filled with flawed, frustrating people. What I began to see as I looked deeper into my own sacred texts, however, was an arc of authenticity that was refreshing and beautiful. Peter was a hot mess. He couldn’t make up his mind from one day to the next what he thought about Jesus. Ancient Jews that went from dancing naked before their God to murdering others in order to rape their wives. The text was brutally honest about how completely messy those communities were… and yet there was Spirit in the midst of them. So it gave me a bit of resilience when I hit my wall in 2014.
I can remember the moment exactly. It was after a meeting in which I had prepared my heart, shared it gently and lovingly with the community I was a part of, and offered to give of myself to help birth it into being. They returned with criticism, judgment, and suspicion. It seemed that after 3 years in that community that they still weren’t willing to trust me. And I was tired of trying to force it. I came home, and I said to Aaron, “Honey, I think we need to pray, but I think I’m done. I think it’s time to move on.”
When we moved to Seattle, I didn’t know if we would find a church home. And it’s a process we are still in. Because I do, authentically, 100% believe in the power of local faith communities to transform the world. And I don’t know about you, but I just still don’t feel safe in Church yet. It’s been 7 years since returning back to the USA from Ireland – a place where I discovered authentic community, embedded in faith, embedded in LOVE, and to have to release that and come back to this? I didn’t know if I would honestly survive. And it still feels awkward and strange and peculiar. I feel like I’m perpetually wondering – what if I show them my real self? Will they be afraid or judgmental, or will they embrace all of me? And I realized that all along, various people had come alongside me – even from halfway around the world – to connect to my heart and my spirit in ways that grew me, changed me, made me better.
These thoughts became the birthing heart of Keeping the Well.
Ashland taught me about hope and about discovering the sacred heart wherever I was, and in whatever tradition I found myself in. It released me into a place of utter, radical dependence on the One Who Is Love in a way that I never could have imagined. It taught me about surrender and about releasing people who couldn’t and didn’t want to see the best in me.
But it also left me reeling in depression for a while after I left, trying to remember why I wanted to be a part of a faith community.
It’s not easy to risk. And I appreciate you risking your deep, intimate parts of your being with us on this journey. I am so honored to be invited into your spiritual journeys as a friend.
The Celts have this term: Anamcara – “soul friend” – and I’m extending my heart to you as an “Anamcara.” The idea is that two souls who share an intimate spiritual/soul connection are stronger together than they are apart. And the rest of the people in this group are incredible people as well. Each of you has served as an Anamcara for me, and it is my honor to open this door to you in this season of your life. I cannot wait to see what Spirit will do for each of us – in our own hearts and lives, but also as a group.
I am hoping beyond hope, that regardless of how far we are – from South Korea to Ireland, from the East Coast to the West, from the PNW to SoCal, that we will be able to rally around one another and become agents of transformation and support. In its original intent, Anamcara looks a bit like a teacher, a bit like a guide, a bit like a compassionate, empathic connection. It’s all of these things and more. And I know that each one of you is already serving as an Anamcara in so many ways.
So…
Will you be my Anamcara?